One of the Spatial Analyst tools we often use in ArcGIS is the Extract Values to Points tool.  This allows us to take a point file (well locations in our case) and attach a value (elevations) from a raster image (a DEM) to each point.

Today I was running it for the first time against an Image Service we recently published and I received a warning message,‘WARNING 000957: Skipping feature(s) because of NULL or EMPTY geometry’.  But the script seemed to run and the final results said ‘Succeeded’ so I thought it was probably fine.  But as I double-checked, I realized the results were wonky.

What I would have expected would be for the two records with Null Geometry to have null values in the [Rastervalu] field and the rest of the records to have the correct values.  Despite the warning, it is very misleading for all the records to end up with a value.

I have a simplified example below.  I made a point shapefile with four records.  The first, third, and fourth  records have valid geometries; the second has Null geometry.  The second record ends up with the value for the third record.  The third record, has the value for the fourth.  The fourth record being the last record, ends up with the last valid value, which was its own.

The results that I would have hoped for would be for the third record to have a Null value.

The way I envision what is occurring behind the scenes is this:  the process makes a list (more of a stack in programming terms) of result values as it processed the points but just assumes that every record will return a value so it does not track which value goes with which shape.

When it reached the two null geometries, it threw an error but continued on.  It did not add a value for these records to the stack of values–when it comes across records with valid geometry but do not intersect the raster it adds a psuedo-null value of (-9999) to the stack.  After it processed all the records it had 395 values in the stack.  It then went, one-by-one through the stack and populated the records in the output shapefile, the first record got the first value in the stack, the second record got the second value, the 100th record got the 100th value (which came from the location of the 102nd record) and so on.  At the end, the final two records received the last valid value.

This final behavior–using the last valid value–corresponds a bit to a behavior we’ve seen with ArcObjects in general.  When iterating through a table, if a field is Null for a specific row, the value from the last non-Null value for that field is often returned. 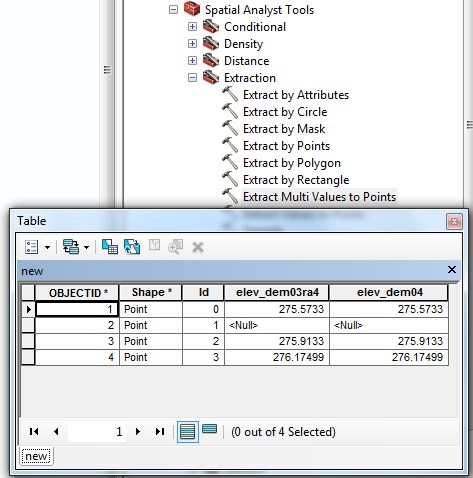