I have been working on updating some data that was published using Arc/Info Workstation Export (.e00) files, converting them to shapefiles, or in the case of annotation, to a geodatabase feature class.

While converting some INFO tables, I have received this error:

It turns out that Workstation can create export files that contain values that did not fit within their field–I’m guessing that somehow you are actually able to enter invalid values into those fields but I did not confirm that.

The error, ‘Unable to encode the 38th item in the 65th record…’ was only partially helpful.  The error was in the 65th record but I was not able figure out which field contained the error.  The nature assumption that it was the 38th column was incorrect, at least if you are counting from left to right.  Whatever logic that is used, is consistent, at least within a specific table, because I had numerous records with problems and when the error messages indicated it was the same item, it did turn out to be the same field.

What I ended up having to do was open the export file in my favorite text editor, locating the info for problematic record and go through the columns one-by-one, comparing the value in the text file with that in the table.  In this case, 14.1 was suppose to be the value in the WP_TIO2 field. 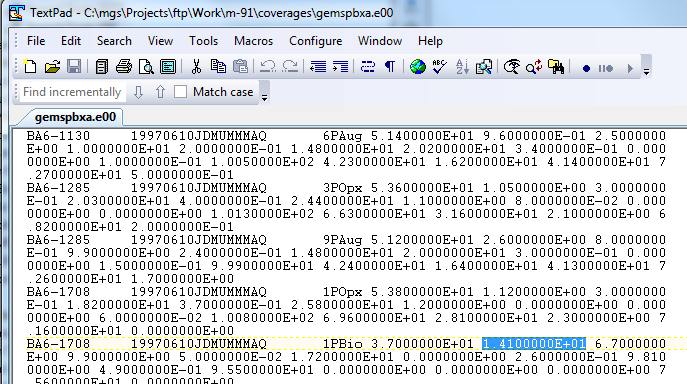 One thing I noticed, and this is consistent with behavior I have observed in ArcObjects in other cases, is that the record with the invalid value in a field ends up with the same value in that field as the previous record.  So in this case, the bad record has a value of 1.12 in the WP_TIO2 field because that is what previous record has.   That leads me to believe that ArcObjects is re-using a variable as it does the import, just updating each value, field-by-field.

Just to make sure that I had diagnosed the problem right, I attempted to change the value to 14.1 in an ArcMap edit session and got this message:

Once I identified the problem, I used two methods to correct it. The majority of my cases were actually cases where a psuedo-null value was being used to indicate that a field was really Null. In some cases, either -999.9 or 100 were being used. In these cases, I just substituted a different psuedo-null value (-99.9) that conformed to the field limitations. The data I was working with was not tightly controlled in the past and there were other existing records that used these value for the same fields, so I was able to do this without much concern.

Some values, however, were not nulls and I felt needed to be retained. These, I had to add a new field that could contain the values, copy the values over and then edit the ones that had caused problems during the import. Once complete, I exported the data to a new table with the new table structure I created.